There are some things that all the technologies have in common: highest safety level, short response times, diagnostic interfaces for troubleshooting, easy configuration and operation, plus robust product features for higher availability. The technologies thus combine safety and productivity with user-friendliness. 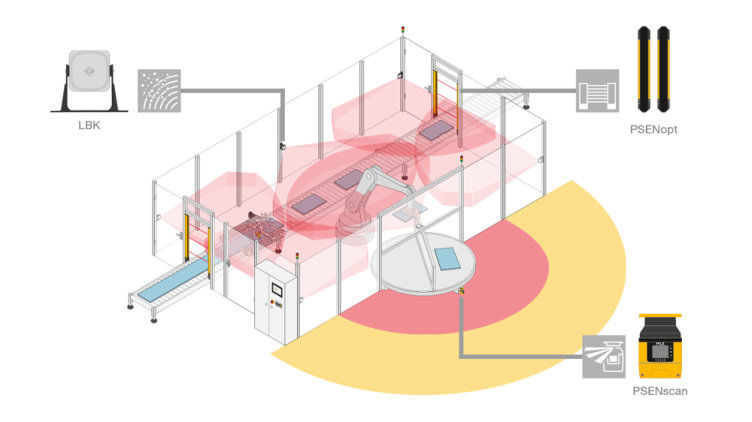 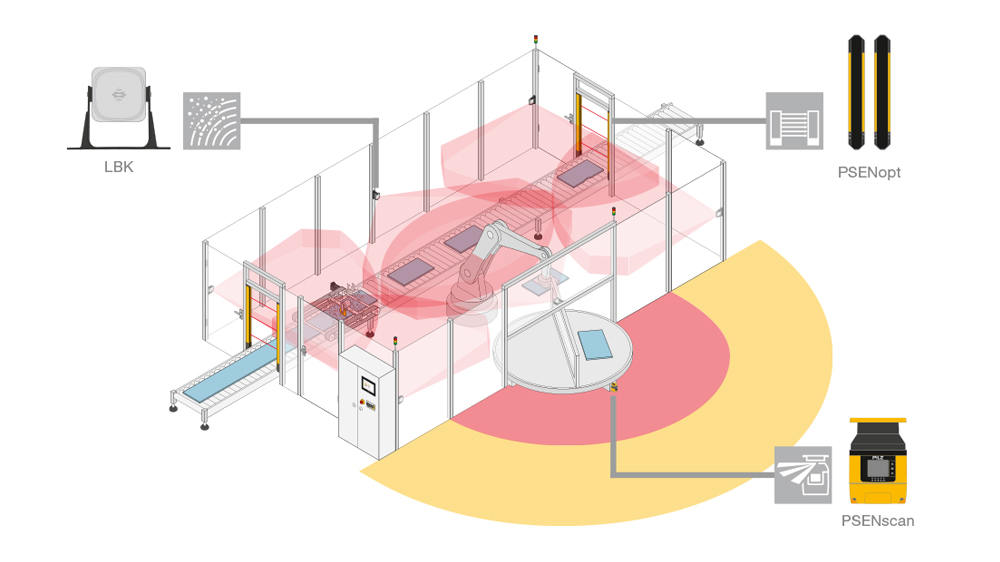 All the applications at a glance

Safety light curtains allow you to safely monitor open access and intervention points to danger areas. Light curtains are the right choice, especially for applications where active intervention in the production process (e.g. material feed and discharge) is required.

Safety light curtains are installed at the access or intervention points to danger zones. They use their infrared rays to register when people or objects are located in the protected field. If a light beam is broken it will immediately trigger a safe shutdown command. Plant and machinery are then stopped.

Depending on the requirements, light curtains provide finger, hand and body protection in accordance with EN/IEC 61496-1/-2. They offer particularly short response times and can thus be placed closer to the danger area. Advanced functions such as blanking and muting have become established to maintain protection mode and still guide material through the light curtain. Applications requiring reach-over and rear access protection can also be implemented with light curtains. Here, users benefit from the light curtains’ cascading function that enables protected fields to be linked in series without dead zones. 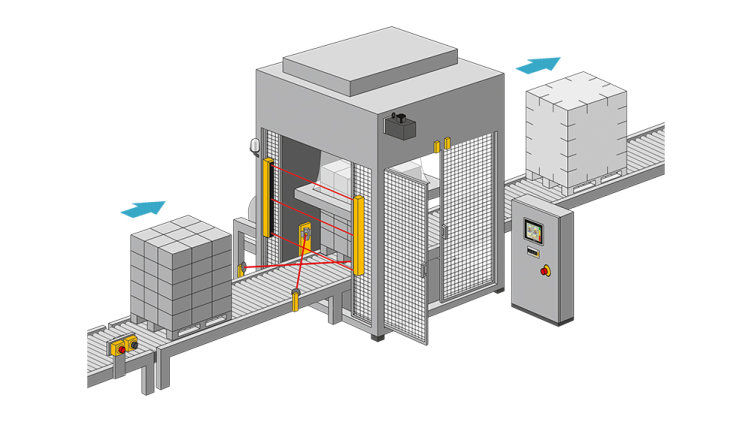 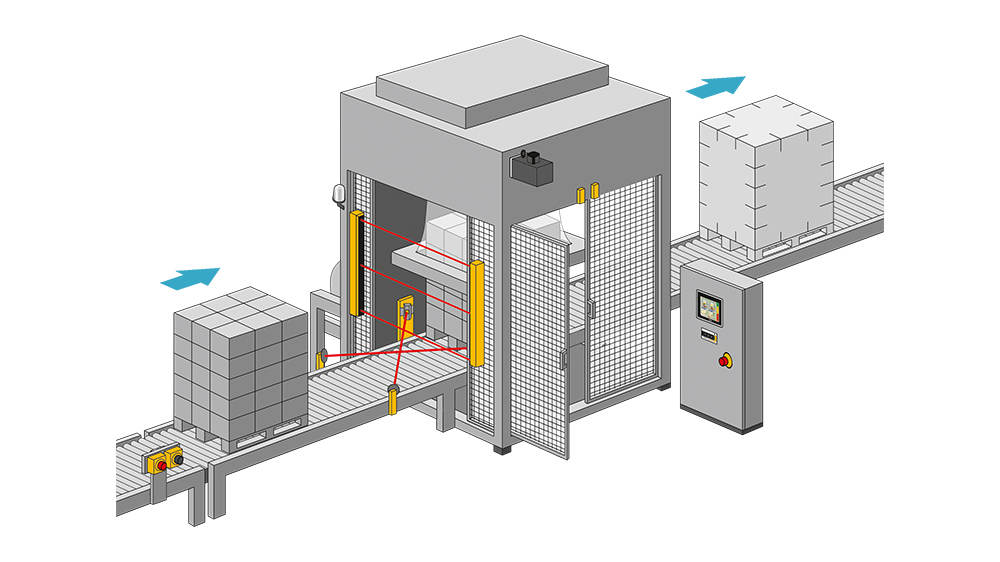 As a Category 3 safety product in accordance with IEC/EN 61496, safety laser scanners monitor two-dimensional areas. A laser beam scans the area to be monitored in this respect. The distance from the object is calculated by measuring the time difference between the light pulse being transmitted and then being reflected back. To detect objects in different directions, the laser is deflected by a rotating mirror and a 275° surrounding area around the scanner is detected.

The protected spaces can be set up flexibly, since several separate zones can be monitored simultaneously with just a single scanner. It is also possible to switch between a variety of configurations. 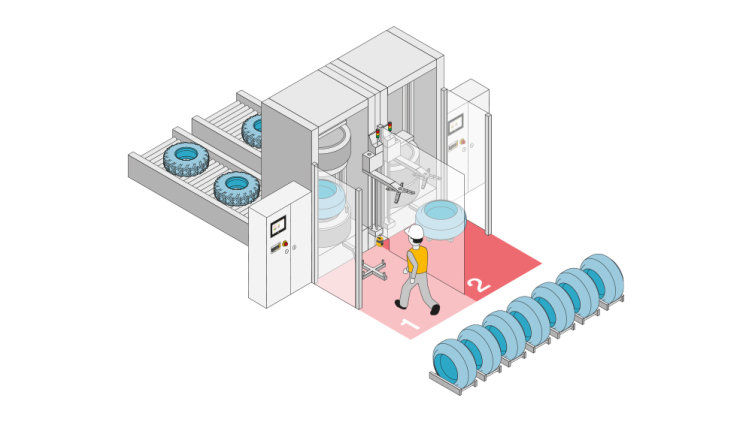 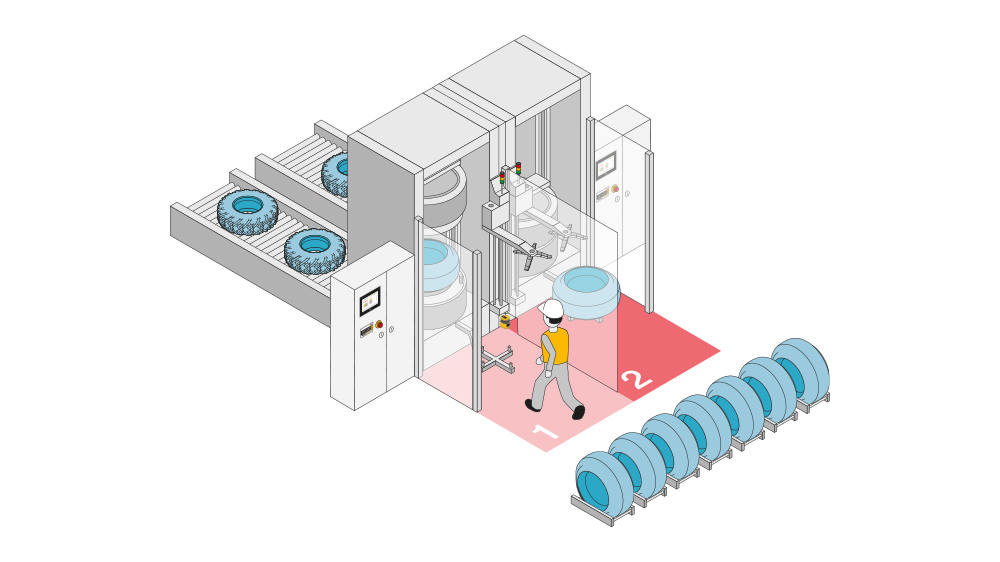 Optical sensors often reach their limits for monitoring danger areas with high robustness requirements and harsh environmental conditions. This is true in the likes of metal and wood processing or for outdoor applications. Radar systems offer significant advantages here due to their measuring principle: FMCW (frequency-modulated continuous wave) radar volume monitoring with a frequency of 24 – 24.25 GHz is particularly insensitive to external influences such as dust, dirt, rain, light or flying sparks.

Radar technology can be used to implement applications up to SIL 2, PL d and Category 2. High-availability radar systems are also set apart when it comes to strong temperature fluctuations. Several sensors connected in series emit radar beams and evaluate the reflections that change over time. This allows detection of moving obstacles in the protected space.

The protected space configuration may vary depending on the size of the area to be monitored. Radar-based sensors are particularly well-suited to all applications with rear access protection (restart interlock) in harsh environments, such as welding work in a robot cell. Safeguarding stationary applications or access forms part of the application area too. 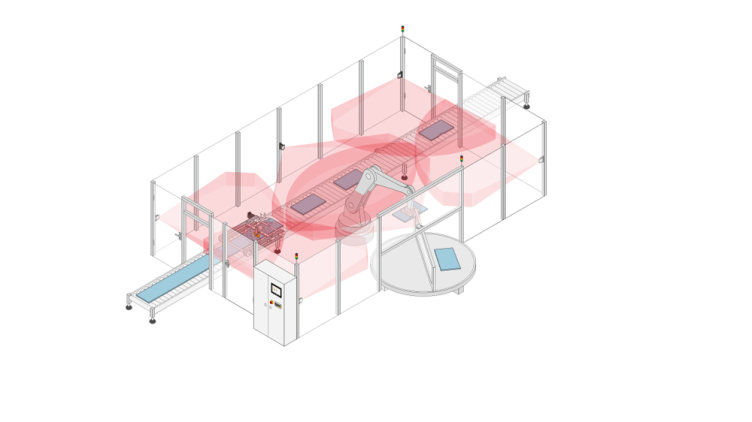 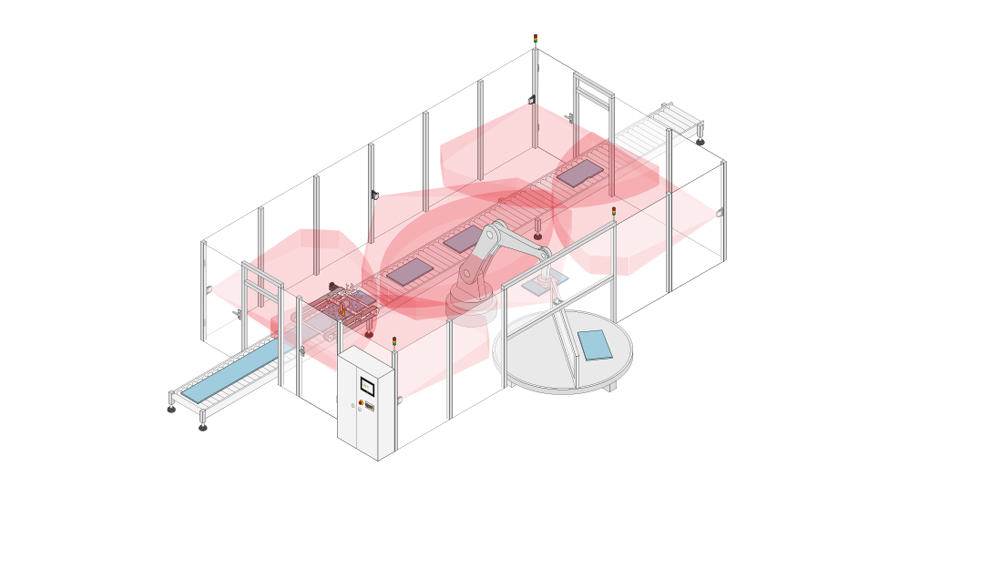 Telecentric camera systems are excellently suited to safe monitoring of press brakes, since they always display objects of the same size – regardless of the distance from the camera. They are installed on the upper die of the press brake and so travel with the upper tool.

By constantly synchronising data between the press brake's CNC controller, the safe controller and the mobile camera system, the safe controller reliably calculates the current position of the upper tool above the plate. Depending on the protected field range, even special-purpose presses such as tandem presses can be monitored without any problems.

The camera-based protection and measuring systems detect even the smallest foreign objects in the protected field between the transmitter and receiver unit. The light beams are transmitted from the transmitter to the receiver via a telecentric lens, which is positioned on the opposite end of the press brake. The detection zones are installed in front of, behind and below the tool. This prevents anyone from intervening dangerously during press braking – from any side. 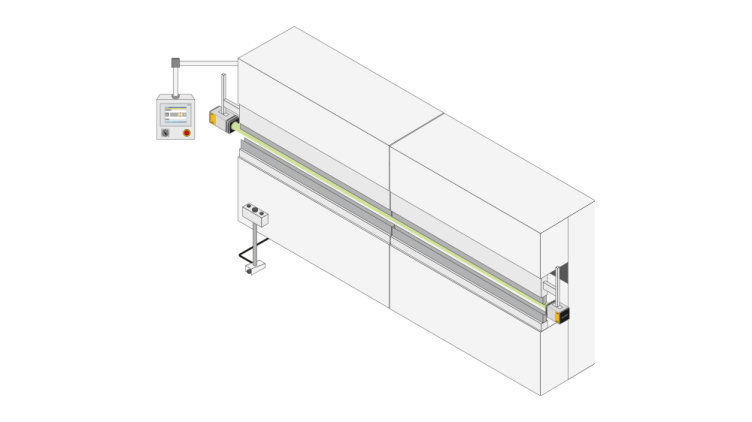 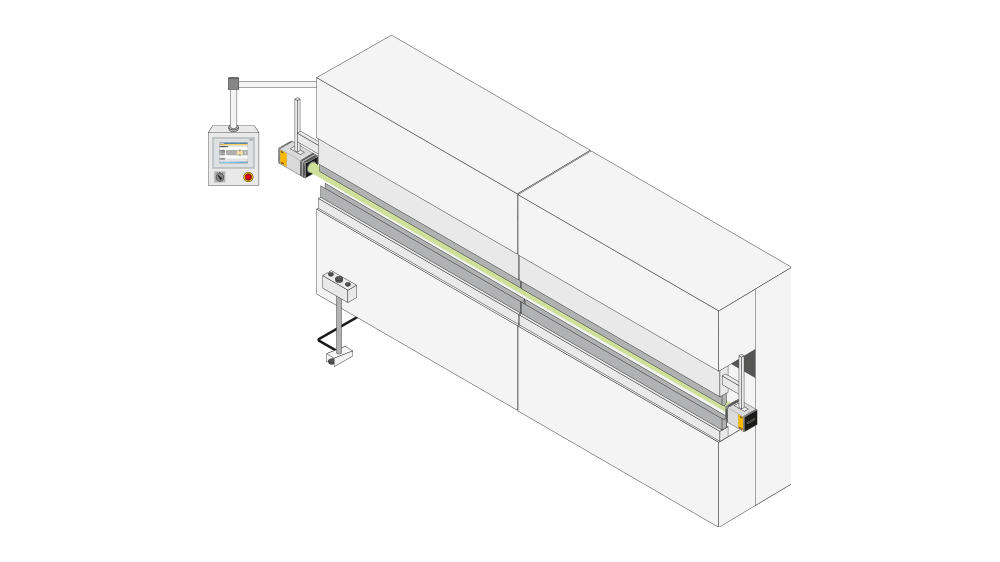 With safety-related equipment on machinery, it’s not just the individual components that matter, but also the way they interact! If you buy safety sensors and evaluation units from a single manufacturer, the interfaces between the components are already perfectly coordinated to one another.

Save yourself the hassle of leafing through data sheets and reading elaborate tests and count on a complete solution from Pilz! 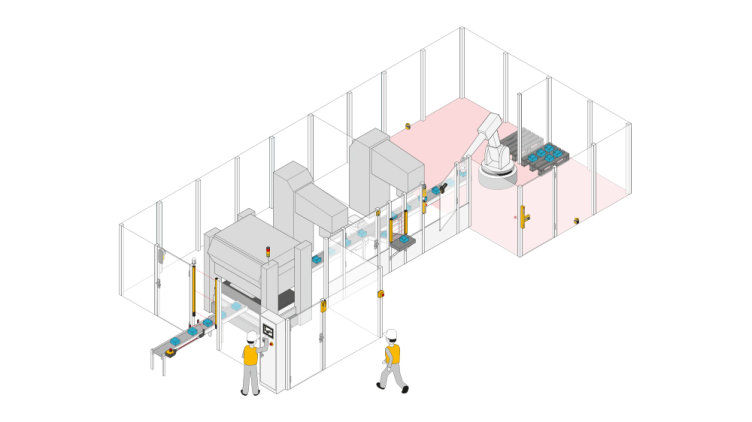 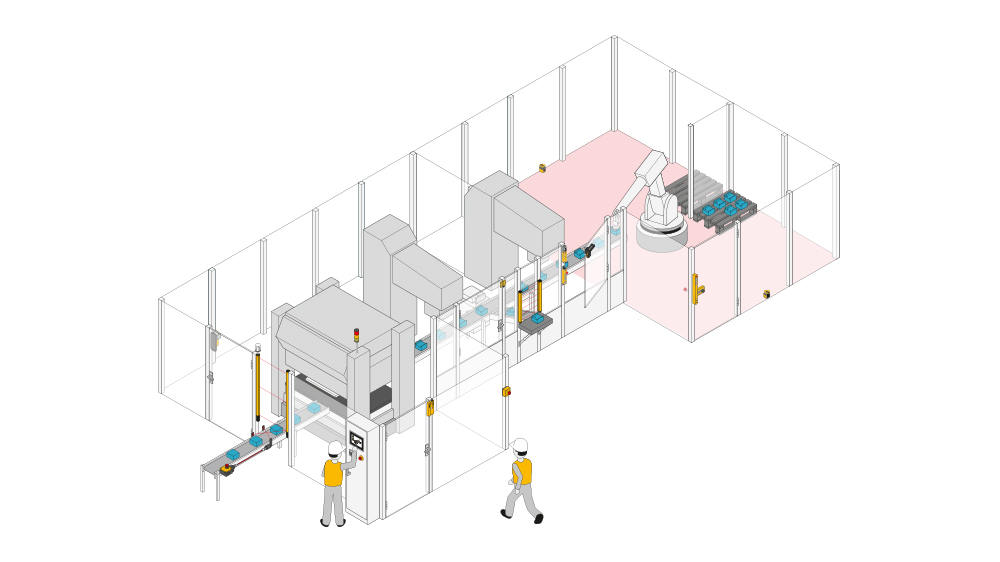