On 23 June, entrepreneur Renate Pilz received this year's Rudolf Diesel Medal. The former Managing Partner of the automation company Pilz from Ostfildern won the award in the “Most successful innovative achievement” category. The medal was presented by the Rudolf Diesel Board of Trustees in Augsburg. Since 1953, the German Institute for Invention (DIE) has awarded the Rudolf Diesel Medal to business personalities and companies who have demonstrated both their inventiveness and their ability to successfully put their ideas into practice within a company setting.

Dr. Heiner Pollert, First Chairman of the sponsoring organisation “German Institute for Invention” and Prof. Dr. Alexander Wurzer, spokesperson for the Board of Trustees, paid tribute to the entrepreneurial spirit of Renate Pilz. In the commendation speech they said: “Pilz is regarded as the pioneer of modern machinery safety. With its technical innovations, the company has set industry standards and so written industrial history. Just like Rudolf Diesel, Renate Pilz had to fight against entrenched beliefs in technology and electromechanics, in order for industry to accept fundamental innovations such as electronic solutions in safe control technology, for the common good”.
Renate Pilz was delighted with the award: “In the name of my husband Peter Pilz and our wonderful staff, I have great pleasure in accepting this award and am eternally grateful for what has been achieved”.

Renate Pilz: an “ambassador for safety”
The entrepreneur Renate Pilz was born in Göppingen in 1940. When her husband Peter Pilz lost his life in a plane crash in 1975, the then housewife and mother Renate Pilz assumed responsibility for the family business: from 1975 to 1994 she played an active role in the company's Advisory Board and initiated the focus on safe automation technology. The objective: to protect human, machine and environment through safe automation in production sites. In 1994 she assumed operational control of her company as Managing Partner and pushed forward with the globalisation of Pilz GmbH & Co. KG as "Ambassador for safety". At the end of 2017, Renate Pilz handed responsibility for the company to her daughter Susanne Kunschert and son Thomas Pilz.

Prize designed by industry for industry
The Rudolf Diesel medal is one of the few industrially independent awards for entrepreneurs: heads of the German industry and technology associations and professors of major universities propose suitable prizewinners. The jury, the Rudolf Diesel Board of Trustees from the sponsoring organisation “German Institute for Invention”, selects the winner. The board consists of around 60 technical leaders and managing directors of medium-sized German companies. 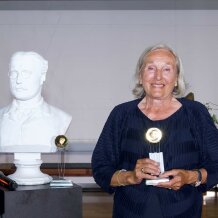