On 14.03.2017, the Australian Ambassador to Germany, Lynette Wood, and the Australian Consulate-General, Richard Leather, visited the automation company Pilz in Ostfildern to find out more about the medium-sized enterprise's solutions for the factory of the future. The talks also covered the importance of values in order for Industrie 4.0 to succeed.

Australia's economy is clearly dominated by the service sector, which makes up 60 to 65 per cent of the gross domestic product (GDP). However, the government is looking for alternatives. With some success. According to estimates from the Department of Foreign Affairs, industries of the future such as information and communication technology or bio-, nano- and medical technology are playing an increasingly significant role in Australia.

Exchange regarding Industrie 4.0
To sound out the opportunities for Industrie 4.0 projects and solutions for industrial companies "down under", the Australian Ambassador to Germany, Lynette Wood, and the Consulate-General and Senior Trade and Investment Commissioner, Richard Leather, visited the automation specialists Pilz. Lynette Wood has been the Australian Ambassador to Germany since September 2016. The General Manager of Pilz Australia, Scott Moffat, stressed that the Ambassador had a personal interest in "exchanging ideas with Pilz about the manufacturing of the future".

The conversation was the start of closer cooperation with Pilz. Further workshops are planned, in which both sides wish to share their experiences. "The talks today were very open and friendly. We are delighted that the Australian Ambassador sees Pilz as an important partner for securing the future of the Australian manufacturing sector". That was the view of Susanne Kunschert, who as Managing Partner welcomed the distinguished guests to the company's headquarters in Ostfildern.

"Values are the foundation for Industrie 4.0"
The agenda at Pilz included a guided tour of the company, along with presentations and round-table discussions with Susanne Kunschert and the Head of Innovation Management, Klaus Stark. Lynette Wood and Richard Leather learned about the company's current products and projects in the area of safety & security in Industrie 4.0. According to Kunschert, the visitors were impressed in particular by "our Industrie 4.0-compatible automation system PSS 4000, which allows distributed plants to be automated safely and simply".

Kunschert stressed that humans are not to be forgotten in all the discussions about technologies: "Industrie 4.0 is essentially a change process, in which humans must take centre stage. That's why it is so important for the company to have a core set of values."

The automation company Pilz has been operating in Australia with its own subsidiary since 1998. Pilz Australia has more to offer than products and systems. From its four sites, it also offers its regional customers a complete service and support portfolio, including technical consulting, customer project support and training. Customers come from sectors such as the food and beverage industry, mining, the process industry and power generation. As an "Ambassador for safety", Pilz has made a name for itself in Australia for creating and defining standards in the field of machinery safety. 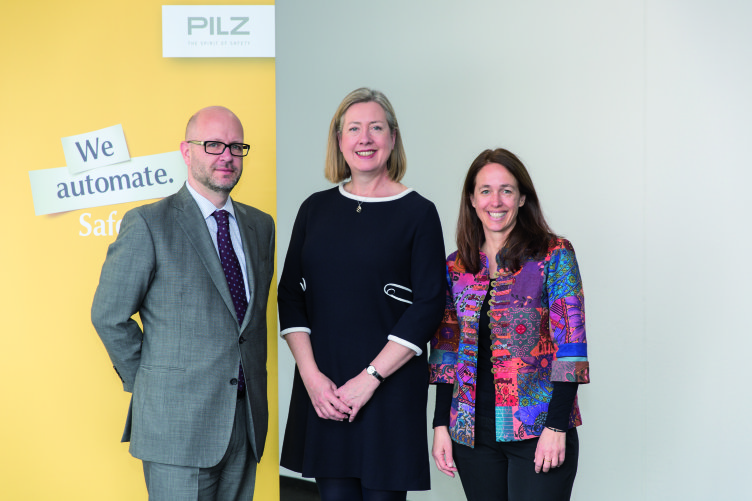 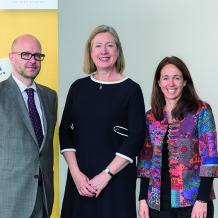 Start of cooperation on the issue of Industrie 4.0. The Australian Ambassador to Germany, Lynette Wood (centre), and the Australian Consulate-General, Richard Leather (left), spoke to Susanne Kunschert (right) about the route to the industry of the future