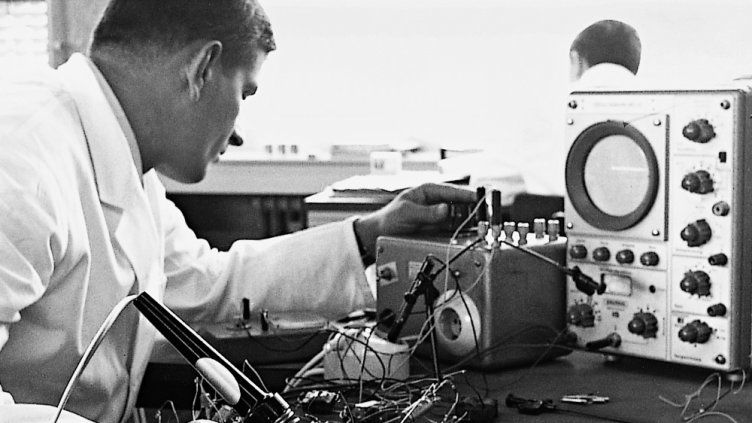 For over 70 years Pilz has been inspiring its customers with innovative products and solutions: initially with glass laboratory equipment, then electronic timers and later relays and programmable control systems. At each point in time Pilz has adapted to the current needs of the market and changed significantly with its technological milestones.

Pilz became technology leader with the world’s first and most widely used emergency stop relay “PNOZ”. It is the epitome of a safety relay and has shaped the history of automation technology. A vast range of experiences from the most varied safety-related applications and the development of one of the first programmable logic controllers (PLC) were the basis for developing the first programmable safety controller.

History of Pilz - How an idea conquered the world

In 1948, Hermann Pilz founded a glass-blowing business in Esslingen. The company initially concentrated mainly on the manufacture of glass apparatus for medical technology and on mercury relays for industrial applications. These relays were the starting point for further development towards industrial relays. Even then his son Peter Pilz was already involved in the company. Thanks to his pioneering spirit, Peter Pilz was instrumental in the company’s transformation from glass apparatus manufacturing to electronics.

The 60s were characterised by progressive miniaturisation in the electronics sector. At that time, product development focused on relays and control systems – above all timers. Pilz became the market leader with these products. To meet high customer demand, it steadily recruited more people to work at its Nellingen location. At the end of the 1960s Peter Pilz took the helm at the company and spearheaded internationalisation with three newly established subsidiaries (Austria, France and Switzerland).

Expansion continued throughout the 1970s. As well as electronic control and monitoring devices, Pilz made programmable logic controllers – a product area that proved a huge success for the company. Pilz also redefined the benchmark in the standardisation of electronic components. Together with major industries, Pilz developed a standard with the series mounting dimension of 35 mm that was ultimately accepted as the standard. Pilz thus became the first industrial electronic equipment manufacturer that was able to market DIN electronic relays.

In 1987, Pilz developed the “Pilz E-STOP relay PNOZ”, which was a pioneering product for both the company and the industry sector, and which is now renowned the world over. Today PNOZ is more than just a product name. Ever since its development, PNOZ has been a benchmark for safety-related relays in mechanical and plant engineering. Pilz was the first to supply such a product range on the world market and became European market leader within just a few years. 1987 saw the establishment of the fourth subsidiary Pilz UK, which has since served the British market.

Pilz extends its role as a global player

Many international branches were founded in the 90s: first there were the Netherlands, Spain and Italy, followed later by the USA, Belgium, Scandinavia, Japan, China Singapore, Brazil, Mexico, Australia and Ireland. Pilz recognised early on that the world market is crucial to a successful future. In 1992 Pilz moved into its production and administration building at the current headquarters in Ostfildern. The adoption of cutting-edge production technologies coincided with the move.

From safety technology to automation

The new millennium heralded in an innovative decade for Pilz. A large number of new products were launched on the market. Most notably the revolutionary SafetyEYE, the first safe camera system for 3D zone monitoring, and the automation system PSS 4000, one system for the entire automation technology. The Peter Pilz Development Centre was built at the Ostfildern site. This increased the production area at Pilz by 50 percent. Software development started at Cork, in Ireland.

Pilz places the spotlight on digitalisation

The present decade has placed the focus on digitalisation. For example, Pilz showcased its “own” Smart Factory at the Hannover Messe for the first time. Internationalisation has continued, too: new subsidiaries have been established, including in India and Taiwan. The first production facility also opened in China, at the Jintan site. The new Peter Pilz Production and Logistics Centre was inaugurated at the headquarters. 2017 saw a generational change: Mrs Pilz handing over the executive management to her children Susanne Kunschert and Thomas Pilz. 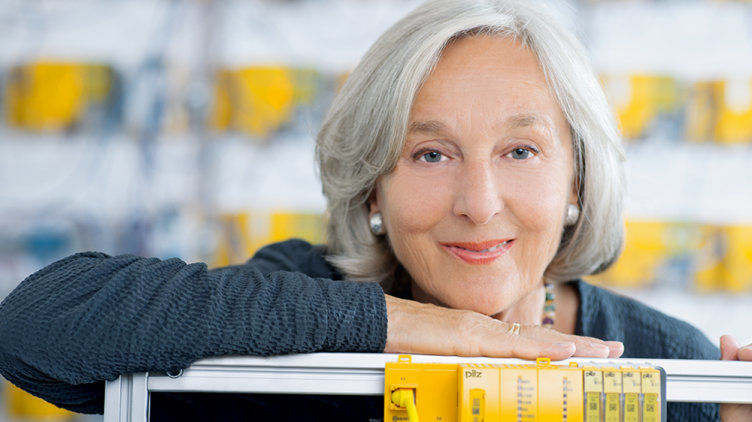 Renate Pilz handed over the management of the company to her children Susanne Kunschert and Thomas Pilz. Until 2017 she had always continued to develop and shape the company, showing great commitment. One example of this is the development of the first programmable safety controller: an innovative and courageous path, where Pilz made industrial history. Continuing the company after her husband's untimely death was a matter truly close to her heart. Under her leadership, Pilz expanded from 200 employees to over 2,000 employees worldwide.

What will change with the generational change? Listen to Renate Pilz, Susanne Kunschert and Thomas Pilz to find out how they found their time working together in the company, what in particular made an impact on them and what they think the future of the company looks like. Take time to discover Pilz’s extraordinary history. 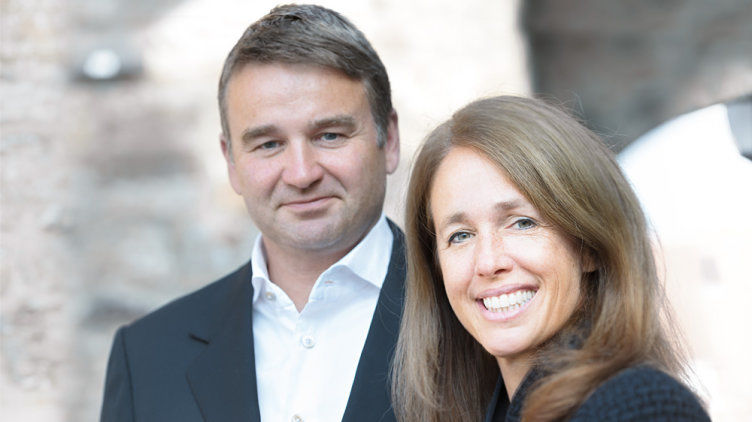 Susanne Kunschert and Thomas Pilz will be the third generation to manage the family business. Pilz is defined by its staff; each and every one is an “ambassador for safety”. We believe no compromises are necessary in the automation of plant and machinery. Issues such as the advancing digitalisation of industry and robotics are the focus of new product developments. We are also involved in national and international committees, so that we can actively help to shape the future of industrial automation. As a family business steeped in tradition, with a worldwide presence, our aim is to be a reliable partner for you locally.

The family business is one of the leading suppliers in the automation sector and is represented by subsidiaries in over 40 countries. Our products and solutions have become established as a brand in safe automation technology. Pilz has set standards in the history of automation for safe cooperation between human and machine.

As part of the compendium “German Standards – Brands of the Century”, Pilz was designated as a brand of the century 2019 in the control technology sector. The award “Brand of the Century” was issued by Dr. Florian Langenscheidt and the Zeit publishing group.

Future of automation with Pilz

Whether it's Industrie 4.0, industrial security or robotics: The factory of the future calls for new concepts, products and solutions. The ability of an agile company is what’s needed to grasp innovative ideas and make them market-ready and suitable for industrial use. Pilz has often proved its ability over it’s more than 70 year history: with products such as the Pilz emergency stop relay PNOZ, the world's first safe programmable controller PSS 3000 or the first safe 3D camera system, SafetyEYE. Innovative strength is firmly engrained in our DNA. For example, Pilz invests more than 20% of turnover into research and development. 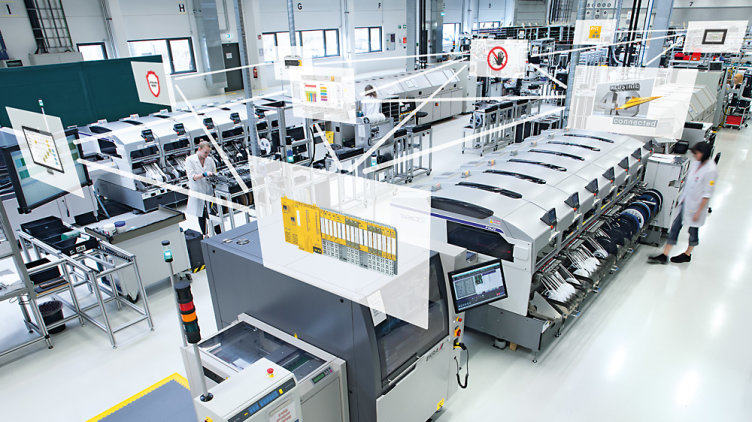 What will the future of automation look like? Networked machinery, intelligent decentralised components, modular production: These keywords describe various aspects of Industrie 4.0 with the aim of achieving greater flexibility, individual customer solutions and greater efficiency in the future.
For many years Pilz has been involved in various research projects, such as the technology initiative SmartFactory KL. Pilz is also intensely engaged with future requirements for industrial security and data protection, as well as the development of standardised, cross-manufacturer communication protocols, which can be implemented in a digitalised industry. 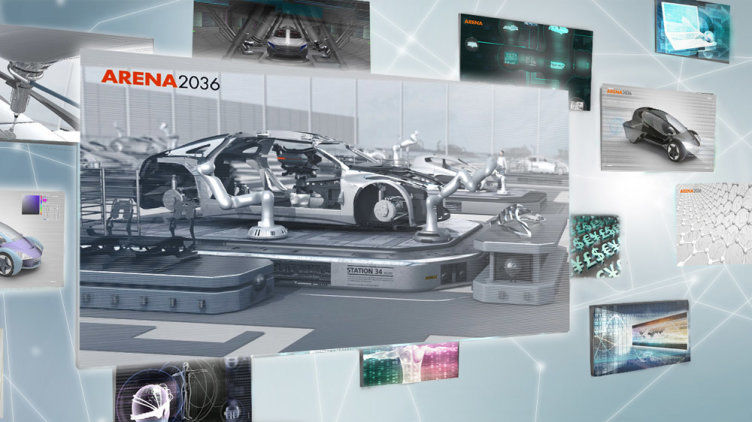 And Pilz continues to concern itself with the future of automation as part of the research campus ARENA2036: ARENA stands for Active Research Environment for the Next Generation of Automobiles. Resource-efficient, competitive production models are intended to emerge by the year 2036, the 150th anniversary of the car.
With its expertise from safety and automation technology, Pilz is promoting the development of cyberphysical production systems CPS. Our vision is to work with other partners from industry and research to build such a production system, put it into service and qualify it for actual use in the production process. 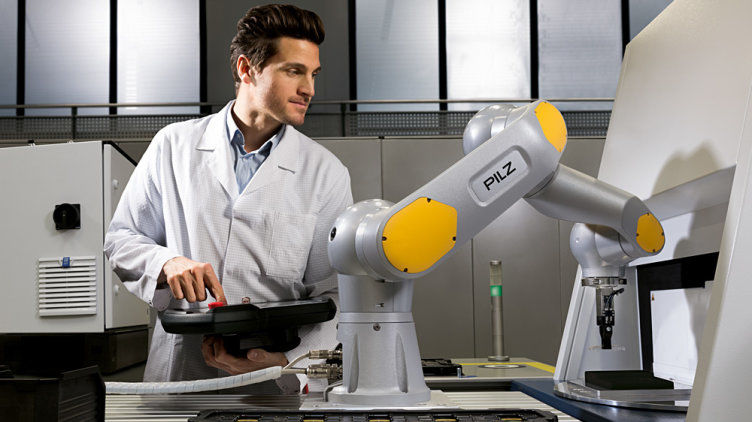 In the factory of the future, the number of autonomous systems and robots will continue to rise - as will the safety requirements for close cooperation between human and machine. In its role as “ambassador for safety”, today Pilz can provide support with services and training around robot safety and also with its own service robotics modules.

Many new questions arise as a result of the digital transformation. For example, how interaction between human and robot will change with increasing intelligence in sensor technology and how data will be evaluated. And also, how the application can be protected from external access (security). Pilz is exploring these and other questions as part of various research projects.